Speaking to Tmz.co.ke, Eastleigh Business Community Leader Hussein noted that the meeting with the leaders was fruitful.

He disclosed that the team discussed ways to mitigate the effects of the partial lockdown on the people’s livelihoods with monthly stipends in the offing.

“We have appealed to the government (regarding vulnerable families) and the minister promised that the government was already giving stipend to 250,000 families and promised to extend the service to Eastleigh. 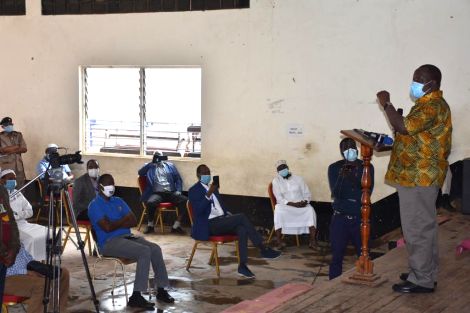 “He also promised that the state would support those who are very desperate with food donations. We also promised, as Eastleigh business community that we would chip in to help families with food,” stated Hussein.

He further noted that the team agreed to review the boundaries of roadblocks to Eastleigh as well as explaining that the estate was not under total lockdown.

“We had a fruitful meeting with them and it was clarified to us that Eastleigh is not on total lockdown. That means that people within the area can do their business. People can open their shops except for bars and restaurants which are expected to follow the conditions.

“Getting in and out of the region is not allowed unless one is an essential service provider. One thing we agreed is that people should follow the protocols instituted by the Ministry of Health including social distance and wearing masks,” he continued.

“The boundaries would also be reviewed. They accented to review the boundaries after they sat with us to change the location of the roadblocks,” he added.

CS Matiang’i who was accompanied by Nairobi Senator Johnson Sakaja and Woman Representative Esther Passaris, earlier announced that Uhuru had sent him on the mission.

“On instructions from President Kenyatta, I met members of the Eastleigh business community and discussed collaborative ways of battling Covid-19.

“I reiterated that we will do so by observing the law, following the Ministry of Health guidelines and establishing safety nets for the vulnerable,” noted Matiang’i.

Residents of Eastleigh decried the lockdown order claiming that their source of livelihood had been cut off since the estate is known as a business hub.

Malls are set to be opened but must follow strict government guidelines.

Emmy Kosgei says no Kalenjin man approached her, most of them are introverts