Kapseret MP Oscar Sudi has asked President Uhuru Kenyatta to ensure that his relatives are prosecuted, alleging that some were involved in the embezzlement of COVID-19 funds at the Kenya Medical Supplies Agency (KEMSA).

Speaking during a press briefing at his Kapsaret home on Friday, September 4, Sudi claimed that some of the companies in the middle of the scandal were owned by powerful individuals in government.

“We want to tell President Uhuru Kenyatta who lectures us on corruption, that we want his cousins and his nephews to appear in court so that we can know that he is truly fighting corruption in the country,” he declared. 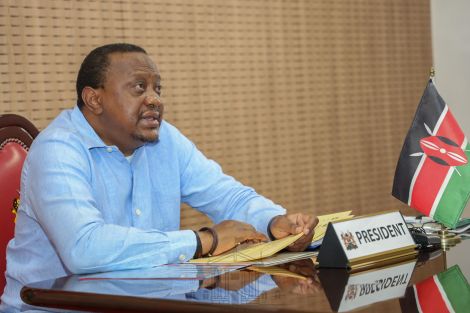 The legislator, who on Monday announced he would name state officers involved in the scandal, mentioned five companies that he believed should be investigated for the graft.

Further, he told the president to conduct private investigations on five of his close allies, whom the MP claimed had been embezzling public funds.

“The president may not know that some of his close friends were involved in embezzling of funds and I want to tell him to conduct private investigations on Jubilee Party’s Vice Chairman David Murathe, State House Chief of staff Nzioka Waita, his counterpart Njee Muturi, Solicitor General Kennedy Ogeto and one Goerge Kariuki,” Sudi stated.

Sudi accused Murathe of allegedly being involved in brokering a number of government tenders.

At the same time,  the Ethics and Anti-Corruption Commission (EACC) detectives are grilling Murathe at their offices in Madison House, Upper Hill, over the scandal.

Priscilla Murungi, the wife of Meru Governor Kiraitu Murungi, was also questioned by the team at around noon.

Murathe is linked to a company awarded Ksh 4 billion by KEMSA for the supply of 450,000 Personal Protective Equipment (PPE). Each of the PPE’s cost Ksh 9,000.

On the other hand, Murungi is associated with a company that pocketed Ksh 45,000 for supplying 10,000 boxes of surgical masks.

Fan asks, ‘How is the man you tried to kill?’ Babu Owino responds