He asserted that donor nations like the United States had had enough of allocating funds for various projects only for graft to rear its ugly head. 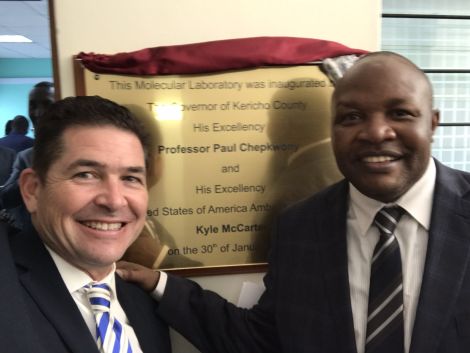 McCarter ruffled some feathers as he demanded answers from Kenyan youth on whether they would correct the situation or perpetuate ills afflicting the country once they took up leadership positions.

“Why keep hauling water up a hill if Ksh800 Billion is leaking from the mutungi (container) all the way there? Will youth get in office and continue the tradition or have they had enough? This donor has had enough.

“Nobody has really answered my question. Will the youth put a stop to this or just join the tradition of thievery? Youth? What do you say? Yes or No?” he posed.

McCarter further broke down aid offered by the United States to Kenya as he questioned if it was being put to good use.

He noted that Kenya receives about Ksh171 billion every year in aid from the US, with a large chunk of the figure going towards supporting the health sector.

Sectors that make up the biggest beneficiaries after healthcare include social development and infrastructure, crisis and conflict, and agriculture.

McCarter’s thoughts elicited a flurry of reactions, with a section of youth vowing to implement change.

The statement, however, rubbed a section of Kenyans the wrong way as they demanded to know why the United States kept giving aid to Kenya if it was consistently mismanaged.

Since his appointment as Ambassador to Kenya in January 2019 by US President Donald Trump, McCarter has spearheaded an anti-corruption push as one of his main priorities.

He has backed the ‘Stop These Thieves’ campaign calling for action to be taken on those accused of stealing public resources.

The ambassador caused a storm when he compared a monkey that stole his biscuits on Saturday, July 25, to thieves of public resources in the country.

“Mgondi (Thief) stole my biscuits! Stop these thieves. If thievery in Kenya was only about biscuits…things would be just fine,” he wrote.

His predecessors including Robert Godec, Scott Gration and Michael Ranneberger pushed similar anti-corruption campaigns in the country during their stints.

Ranneberger, in particular, rubbed several politicians the wrong way as he promised travel sanctions and punitive actions on those implicated in graft.

It was during his time that former Attorney General Amos Wako was banned from traveling to the United States over alleged involvement in corruption and abuse of office, allegations Wako vehemently denied.

Watch a video shared by McCarter below: