All my friends will tell you that i am obsessed with Chimano. Work in progress, wait for it. 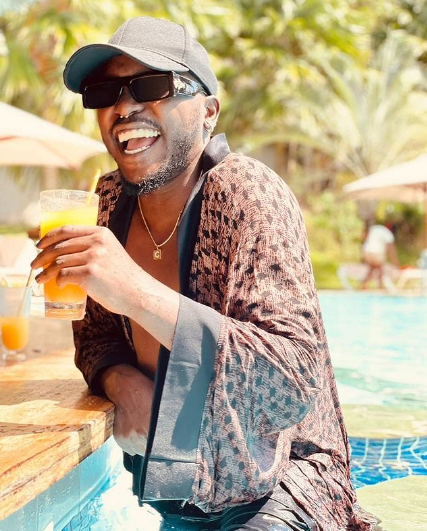 Sauti Sol’s Chimano has for a long time been on the radar of netizens over homosexuality claims.

Over the weekend, a video of Chimano getting cozy and kissing a man went viral on social media platforms.

In the video, Chimano was hanging out with Daniel Roshi, where they kissed each other on the cheeks.

“All my friends will tell you that i am obsessed with Chimano. Work in progress, wait for it,” Daniel Roshi wrote.

Even though Chimano has never come out to declare his sexual orientation, a number of Kenyans accuse him of being homosexual for his tendency to adopt some feminine traits.

Sometimes Chimano’s dressing codes have been labelled as feminine, together with his twanging accents.

The recent video of him kissing a man sparked mixed reactions on social media. Here are some of the comments.

@ Kenneth Njeru – “Hii ujinga ndio tunafaa kupigana nayo. This unbecoming behaviour getting out of hand. The earlier the nation holds this topic the better.”

@Bosco Bontell – “Being gay is not western, mate. Everybody has a life, which we should all help them achieve, not criticise them for the same. No gay is against you being straight. Let’s all appreciate each other’s life.”

@Kenyan poet – “Foreign culture?? Did you know Baganda kingdom had homosexuality engraved in their traditions..They even had a king who was gay.”

@ Highland nilote – “There should be a national eyewashing day to cleanse ourselves of the demons brought by white men, A swaliland type of Reed dance to cleanse the land of this detestable culture.”

Murder scene! Inside lawyer Elizabeth Koki’s house where she was murdered

‘I was in a toxic relationship, people accused me of using cocaine and hard drugs,’ Akothee narrates