Skip to content
Life Style News Politics
September 9, 2020 tmz editor
Wildebeest crossing the Mara River.
FILE
A video that has since emerged online of a camp built along the Mara River has sparked outrage as it blocked the migratory path of wildebeests in the Masai Mara Game Reserve.

In the clip, the animals are seen crossing to the other side of the river only to encounter the premise in their path. With no way forward, the wildebeests gather at the fence of the camp.

Individuals at the camp are later seen chasing away the wildebeests, forcing them to turn back and seek an alternative route.

Watch the video of the incident below:

Reacting to the video, Tourism CS Najib Balala assured that the ministry was working with the county government of Narok to resolve the situation.

“I have discussed with Narok Governor Samuel Tunai, about the camp built beside the Mara River, blocking the Wildebeest crossing. It is very disturbing and we expect the Governor to take action and have the camp removed.

“I have also insisted that we need a Maasai Mara National Reserve Management Plan, that will not only enhance biodiversity but also protect our wildlife migratory corridors from greed,” he stated.

The video sparked outrage with many faulting the authorities for permitting the construction of the premise.

“How does the county even approve such a project? Where is NEMA in all this? Do they only get involved when one tries to start a micro-enterprise in Kenya while big businesses are exempt from being responsible for the environment?” one Twitter user observed.

“Anything and anyone that obstructs wildlife movement within gazetted conservation areas is insensitive to the needs of those animals in their natural habitat,” Kurgat, a tourism professional noted.

Another Kenyan opined that there were many more camps set up along the river and they should also be taken down to protect the ecosystem.

“Then all camps on that river must go. We can not be selective because of one incident. Start from the camp occupying the rhino breeding area to Olare Orok and Talek rivers. All have disturbed wildlife,” the user stated.

The wildebeest migration is one of the major tourist attractions at the Maasai Mara reserve.

Every year,1.2 million wildebeest make a clockwise migration loop around the Serengeti – from the Serengeti National Park in Tanzania to the Maasai Mara National Reserve in Kenya, and back, thousands die. 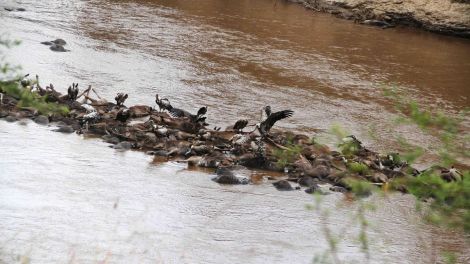 Vultures feed on hundreds of wildebeests that drowned on the afternoon of August 23, 2020 in a bizarre incident within the Maasai Mara Game Reserve.

How Donated Masks are Used to Rob Motorists