Kirinyaga Governor Anne Waiguru is facing eviction from her Ksh 80 million house in Kitisuru, Nairobi, with the landlord claiming that she owes over Ksh 44 million in rent arrears.

The Governor rushed to court to challenge the eviction notice issued on February 29, arguing that she bought the house and she is the owner.

The Governor’s lawyers argued that Kihingo Village Ltd, the developer, was aware of the purchase deal and allowed her to move into the house before it was sealed.

Kihingo Village Ltd, owned by ex-Tetu MP James Ndung’u Gethenji and his brother Gitahi Gethenji, however, insisted that she is a tenant and hasn’t paid rent for five years. The company wants Waiguru’s assets seized by auctioneers to pay for the rent accrued.

“Our client is not aware of any sale transaction with your client. If you have a copy of the same, please forward to us,” Kihingo Village attorneys responded.

Waiguru’s lawyers accused Kihingo Village of frustrating efforts by the bank to offset the mortgage by failing to deliver relevant documents.

Justice Elijah Obaga issued temporary orders against the eviction and ordered the two parties to solve their issue amicably. Waiguru had asked for permanent orders to halt the eviction.

“Noting her status as the Governor of Kirinyaga County, such an unlawful and unwarranted action of evicting her will no doubt cast aspersion as to her reputation,” Waweru Gatonye, her lawyer stated.

Kihingo Village has 55 housing units on a 37-acre plot with units reported to be now worth Ksh 400 million.

The owners, ex-Tetu MP James Ndung’u Gethenji and his brother Gitahi Gethenji, have been battling for control of the estate for years. On November 10, Commercial Court judge Justice David Majanja declared that the two cannot unilaterally administer the estate nor do they have authority over the firm managing the posh residential homes. 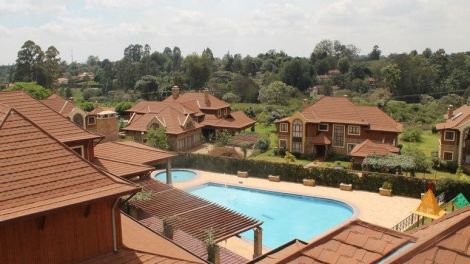 You Will Burn in Hell – Moses Kuria Rants Over Eviction of 7,000 Families

‘…saw this coming!’ Avril reacts after comedian Nicki Bigfish was beaten for his tasteless jokes