“We Simply Started Growing Apart,” Mark Pilgrim and His Wife Announce Divorce. After 13 years of marriage the two have decided to call it quits. Mark Pilgrim and his wife Nicole, wrote a joint statement about the state of their marriage and shared it on social media.

The couple who got married in 2007, in Mauritius have decided to open up after leaving apart for over a year. Mark and Nicole are now setting matters straight after many speculations about their separation. They have been happy together over the years but as time went by, Mark and Nicole grew apart. Although they went for counseling a couple of times, it was not enough to save their marriage.

The two say they will remain friends and still respect each other, despite the divorce. Nicole and Mark share two daughters, Alyssa and Tayla-Jean, who they will co-parent to the best of their ability. 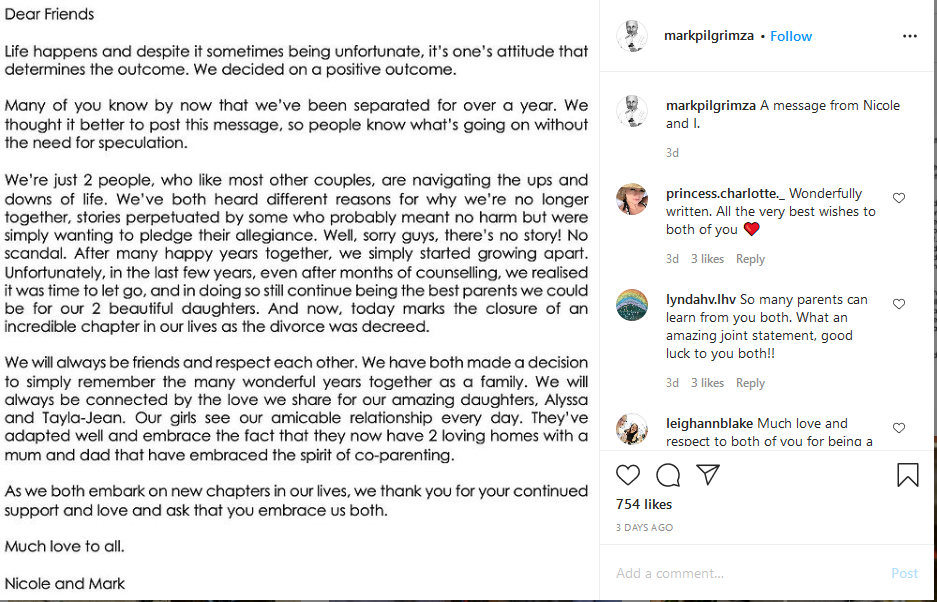 Mark Pilgrim is an award winning media personality who has spent over 25 years entertaining millions of listeners and viewers. Mark has hosted numerous radio and television shows, most notably as a DJ on 5FM, 94.7 Highveld Stereo and 94.5 Kfm. He has also hosted the first season of Big Brother Africa and Power of 10.

In addition to being live on air 6 days a week (HOT 91.9FM, Monday to Saturday 9am – 12pm), he spends a lot of his time in recording studios doing voice overs for commercials, AV presentations and IVR lines.