Waiganjo, who is also Governor Waiguru’s husband and represented her in the Senate, had agreed to come on the show to discuss the impeachment hearings which concluded on Saturday, June 27 with a select committee clearing Waiguru.

Waiganjo disclosed to Anne Kiguta why he took up the case despite his close personal connection to the embattled Governor.

This, however, did not augur well with Njiru who accused Waiganjo of letting emotions run high and using them to frustrate arguments against the Governor.

Waiganjo had explained that he carefully analysed different aspects of the case and considered himself the best placed to handle it.

“I had to make a difficult decision because in an ideal world this is not what I’d rather be doing, there are more interesting things to be doing. This country has big problems, that is not the sort of thing I’d want to be doing with my life.

“But one has to ask who would put the best case so that the country can hear the best case? I thought I could and I did my best,” he stated.

Njiru noted that Waiganjo had once taught him Professional Ethics at law school, but accused him of lacking ethics in the Waiguru case.

He dismissed Waiganjo’s assertion that he was the best placed to handle the case, noting that Waiguru had a battery of lawyers determined to frustrate their arguments.

“He (Waiganjo) taught me professional ethics. He was very clear on the issues of what is ethical in law and what is not ethical in law.

“This evening he mentions it was a delicate balance for him to choose between understanding the case,  bringing the emotions of the case and the politics of the day.

“Whether there is the politics, emotions or facts of the case, he ought to have remained an advocate of the High Court of Kenya. True to the words, even when we were making these arguments you could see the emotions flying all over to an extent that some of us were denied an opportunity to bring a very fundamental issue that could have crowned the whole argument we were bringing.

“He says he’s the only person who could understand but he had a battery of lawyers. I think we young lawyers, we were left wondering what role was Kamotho Waiganjo playing, a husband’s role or an advocate’s role,” he stated.

At one point, Waiganjo was forced to interrupt Njiru insisting that there was absolutely nothing wrong with him playing the role of a husband.

He cited his credentials as a Constitutional lawyer, noting that he understood the case well and, anyway, the client had a constitutional right to choose their lawyer. 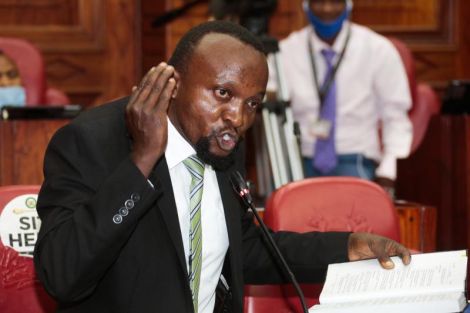 Lawyer Ndegwa Njiru. He is representing Kirinyaga County in the hearing to impeach Governor Anne Waiguru which started on June 23, 2020