Mr Atwoli, who has been a harsh critic of Ruto, offered free advice to him on how he can salvage his career in the wake of formation of political alliances.

“[I am] not actually in bad terms with the DP as he is also the son of Kenya. He can today welcome me to his house and vice versa and we share a meal,” said Atwoli who is on record pouring cold water on Dr Ruto’s 2022 presidential bid.

“It’s possible for DP Ruto to work together with Raila. The former Prime Minister can help him to regain his standing. Yes! Yes! It’s possible,” shouted Atwoli. 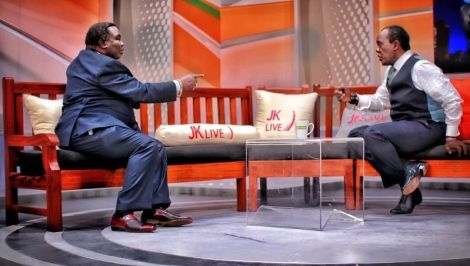 Cotu boss also indicated that the DP is to blame for the woes he is facing in Jubilee which have seen his close allies stripped of their key parliamentary positions.

Close allies of the Deputy President have been going through hard political times, with a number of them getting removed or dewhipped from major political positions.

Two weeks ago, Elgeyo-Marakwet Senator Kipchumba Murkomen wa removed as Senate majority leader, Meru Senator Kithure Kindiki was last week removed as Deputy Speaker and Nakuru’s Susan Kihika was also stripped of her role as majority whip in the Senate. The purge is now said to be headed to the National Assembly.

However, while speaking with Tmz.co.ke on Friday, May 29, Kimilili MP Didmus Barasa differed with the trade unionist’s opinion while political analyst and development practitioner Nafula Kisiangani gave an in-depth analysis of Ruto’s possible next move.

“First of all, the advisor who asked Ruto to be silent amid this conflict has advised him well. He needs such good and experienced advisers. If he can keep quiet, then he can strategise.

“However, if I were him, I would be remorseful, and not confrontational. He should humble himself and look out for Raila and have breakfast with him, and people like Interior CS Fred Matiang’i to mend fences. He should also sit down with those who he perceives are opposing him and start working a fresh,” Atwoli stated.

The COTU chief while reiterating that he did not have anything personal against Ruto, argued that the DP would make a good leader but Kenyans would regret electing him as he harbours hate, and had blatantly shown defiance to Kenyatta.

“There is no person who can persevere for a long time than Kenyatta, it took him long to persevere Ruto. Ruto is a shrewd leader if he can compose himself, he still has an opportunity after 2022, not 2022.

“There is nobody who has had sympathy votes in this country than Raila, so it is wrong saying Ruto will be elected by Kenyans on sympathy. Things change. People can forget all about you in 2 mins. If popularity was to make someone a President, then Martin Shikuku could have been one,” Atwoli stated.

Ruto’s ally, Didmus Barasa, who hinted at the DP’s 2022 partnership with Musalia Mudavadi, Amani National Congress leader, differed with Atwoli stating that there was enough time before 2022 to craft a way through and Ruto had options to work with other leaders.

“I respect Atwoli, but I don’t think he speaks for the DP. He isn’t a prophet who sees the future and Ruto will re-emerge stronger,” the Kimilili legislator stated.

Nafula Kisiangani, Chief Executive Officer Ubuntu Development Solution, a Human Development firm, also differed with Atwoli, dubbing him a propagandist who was out to drive his own agenda and a KANU mouthpiece.

“For long he has called for Uhuru to stay in power. Any advice he gives the DP should be refuted. Ruto may be elected and people will perceive him differently from Atwoli’s perspective as he has his own strengths and weaknesses.”

Noting that she was neither for nor against Ruto, Kisiangani expressed beliefs that Ruto is more focussed on succeeding Uhuru rather than the political heat.

“He may be denied the tools of power but he should listen to the common mwananchi as he is disadvantaged in the fight. He should also avoid the fight as much as he can as he may end up more bruised.

“On whether the system will block him from the presidency, it’s all about playing his cards well. in 2002, former President Mwai Kibaki won and yet all the dynasties were against him,” the analyst opined.

Meet The Mothers Who Bore Your Favourite Kenyan Celebrities