A woman delivered a 13-year-old stone baby at the Mandera County Referral Hospital on Tuesday, November 17 in a rare and historic medical operation.

Hawa Adan had an abdominal swelling for 13-years commonly known as lithopedion, an ancient Greek term for a stone baby.

The 31-year old woman from Ethiopia had sought medical help from various hospitals in her native country but none offered her proper diagnosis on her condition. 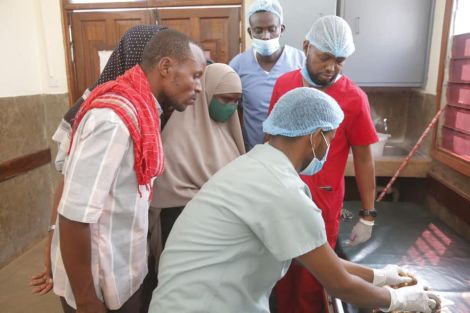 Doctors from the Mandera County Referral Hospital after removing a stone baby on Tuesday, November 17.

She resorted to visiting Mandera County Referral Hospital back in September where a Computerized Tomography (CT) scan revealed that she had lithopedion.

The milestone operation was confirmed by Madera Governor Ali Roba who commended the team of gynecologists from the hospital.

“Hawa was operated on and delivered a stone baby successfully. After closer scrutiny, it was a male infant, complete with placenta and cord weighing 1.75KG. Hawa is now recovering at the surgical unit of the hospital,” read a statement from Mandera Governor Ali Roba.

Lithopedion is a very rare condition with a medical report revealing that there are only 300 known cases in the world, recorded in over 400 years of medical literature.

There is no single case reported in East and Central Africa with only three cases documented in Africa, two in South Africa and one in Ghana.

For those suffering from this condition, the fallopian tube can only allow expanding of the fetus to a certain limit beyond which it will either rapture or discharge the product of conception through the fallopian tube to the abdomen cavity.

Lithopedia may occur from 14 weeks gestation to full term. It is not unusual for a stone baby to remain undiagnosed for decades and to be found well after natural menopause.

The oldest case of a woman with lithopedia is one-hundred years old at the time of diagnosis and one of the reviewed cases had carried a stone baby for over fifty years before diagnosis.

In the case of Hawa, she carried the baby for 13 years and was only diagnosed when she came to MCRH in September but she did not show up for the scheduled surgical procedure.

She later showed up on Monday with the surgery performed on Tuesday.

Doctors from the Mandera County Referral Hospital after removing a stone baby on Tuesday, November 17.