Wanjiru Njira, a civil rights activist associated with the Mathare Social Justice Centre (MSJC) was taking part in the 30th annual Saba Saba demonstrations in Nairobi when she got accosted by the police officers.

In the video obtained by TMZ.co.ke, Njira is seen telling off the police as they tried to handcuff her challenging them to provide reasons for her arrest.

Amid the scuffle she is heard telling them that many Kenyans had suffered in the hands of police officers before and that she would not be intimidated by the men in uniform. 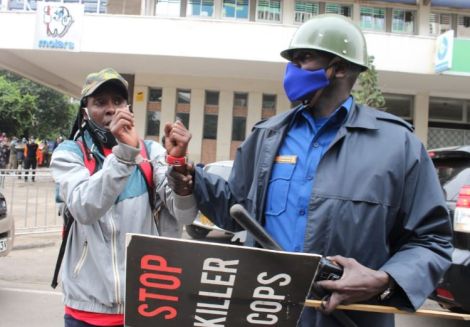 A protestor being arrested by a police officer on July 7, 2020.

“I am not cooperating and I am not going (to the police station). Why are you arresting me? Give me a reason. I protest because you are killing us in poor communities,” she stated.

The three officers, after losing the battle, are seen walking away from her.

“People power! When we lose our fear, they lose their power,” she shouts as the crowd repeats after her.

Several Kenyans took to Twitter to crown her a hero for resisting arrest noting that police officers got off easy by intimidating protesters.

“Wanjiru Njira is one of the bravest woman human rights defenders I know!” declared Robi Chacha.

“Thanks Wanjiru Njira for not cooperating with these criminals in police uniform. You are a hero of today,” added another user.

Earlier, during the protests, more than 20 people were taken into police custody while matching in Mathare and Dandora areas.

Kibra activist Editar Achieng’ , together with Boniface Mwangi, were among those who were arrested during the Saba Saba protests heading into the city.